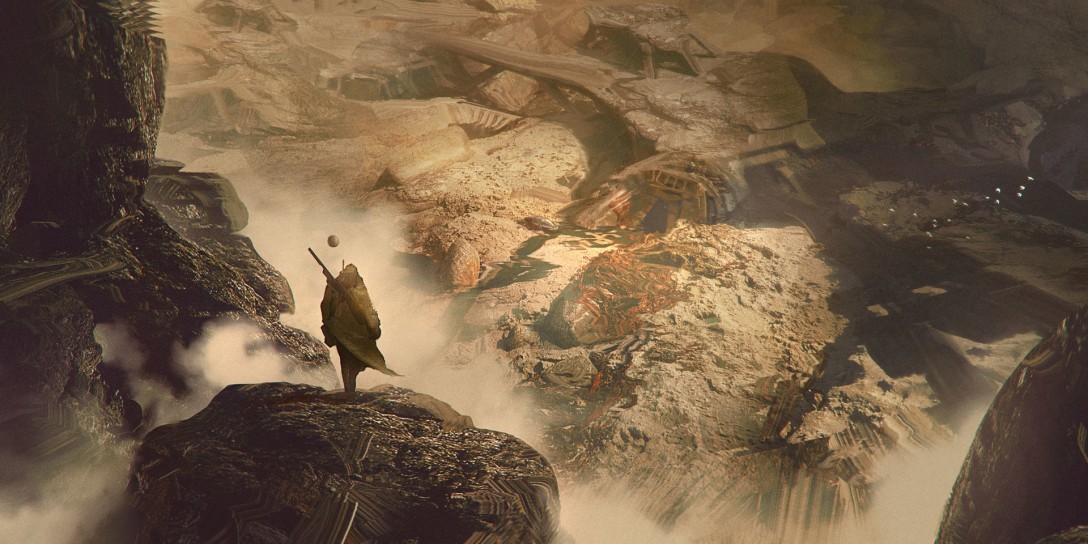 Even through the filters, the air reeked of sulfur. Yellow starlight punched swirling holes through the cloud cover and baked the gases out of the strange crystalized rocks that covered the region—a product of the crash, surely. Tavish watched the ship’s entrance from his perch atop a stone column across the steam-filled gorge.

Three days now, and no one had emerged. Anyone able to exit would have done so by now. It was time to find out what was in there.

The downed starship was wide and flat and black with plating that reminded him of scales; it looked like a charred sea turtle, or what he thought a sea turtle looked like anyway. He didn’t recognize it as a revolutionary design, and it certainly wasn’t Imperial. It wasn’t local, regardless—it was from beyond the nebula. Small, by starship standards, no larger than the Refuge. That’s partially what made it such an attractive target; it had been easy to shoot down.

Tavish made his way nimbly down the rockface, leaping from one hold to another without the stickiness of hesitation, shifting his rifle from one hand to the other in midair as he went. But his mind was elsewhere. It was already across the trench, past the steam, through the ship’s entrance, and into the belly of the cargo hold.

Alien tech was his ticket home, back to the greenery of the Eastern Islands. Out of exile. Back to the Refuge.

His body steadily gained ground on his daydreaming, and he emerged from the steam roiling from the gorge’s trenches, casting it from his shoulders as one might shrug off a robe. His gaze was pulled to the figure approaching the ship, only ten meters out, swaddled in an unapologetic wrapping of scarlet and purple.

It was Nevaeh. What was she doing here?

Notes: I used an image as a writing prompt for this piece. You may be able to find the image on the artist’s ArtStation page. Image by Arnaud Kleindienst, used with permission.