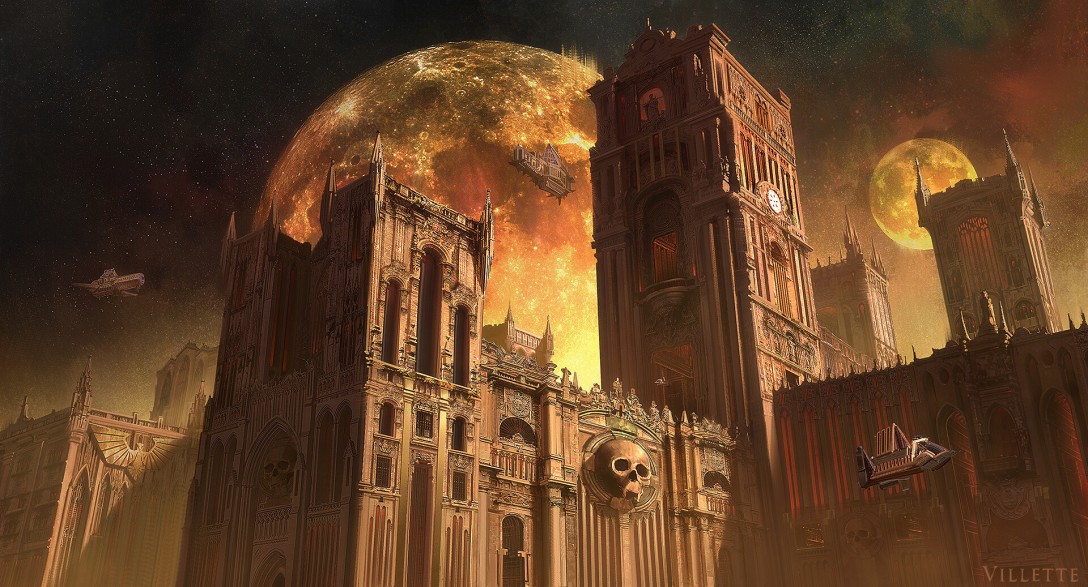 The shuttle had no windows, but the sudden lurch told Lady Verity they’d uncoupled from Saint Donovan’s Interment. The temperature in the shuttle quickly rose like it was a tin can in the summer sun, heated by the tremendous friction of the descent through Lachesis’ thick sulfurous atmosphere. Four centuries of landings like this had pulverized her bones to powder long ago. The silicene rods that now held Lady Verity together were much sturdier—built to last, though not in a blasphemous way—but they fit like someone else’s clothes and pinched her flesh as the rattling shuttle tossed her about.

Still, it was good to be back.

The shuttle landed hard on the pad and the gangway sprung open without ceremony. A clunky rebreather automatically crept out from within her wimple to cover her nose and mouth, but it did nothing for her eyes. The open air of Lachesis felt like a wall of prickly pears. It was meant to remind you of the Nine Torments, and it did, but she was always a little distracted by the striking image of Lechesis’ two sister moons, Clotho and Atropos, blazing so near in the sky to the spires of the Cathedral of the Diviner’s Sepulcher. Shuttles swarmed in the narrow space between like flies above a carcass. And that’s of course what they were. Humans lived off the waste heat of dying stars, decomposers of the cosmic food chain. We were all the agents of entropy. It was the central pillar of the Church of the Falling Sky.

Lady Verity passed through the Cathedral’s air barrier and marched confidently through the halls. The templars, bulky synergies of biology and machinery, weaponized to the max, parted before her, afraid not of her person but of what she represented. Lady Verity walked beside the only God who ever was—Chaos—and where she went, Chaos would act. Lady Verity, the Holy Harbinger.

Decimation comes too for the devout, as it comes for one and all.

Notes: I used an image as a writing prompt for this piece. You may be able to find the image on the artist’s ArtStation page. Image by Karine Villette, used with permission.

2 thoughts on “Church of the Falling Sky”